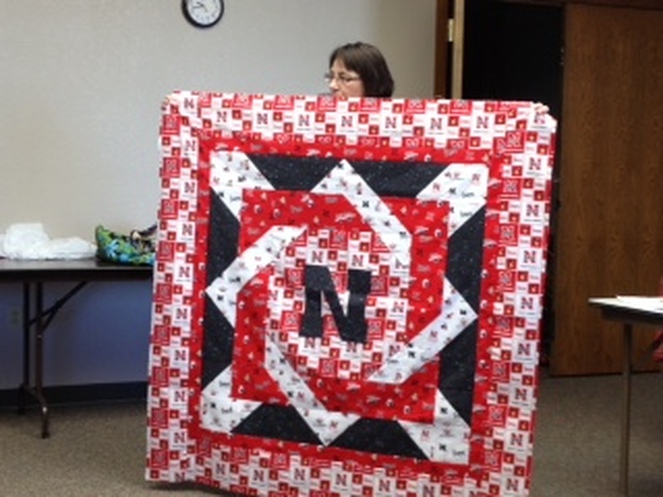 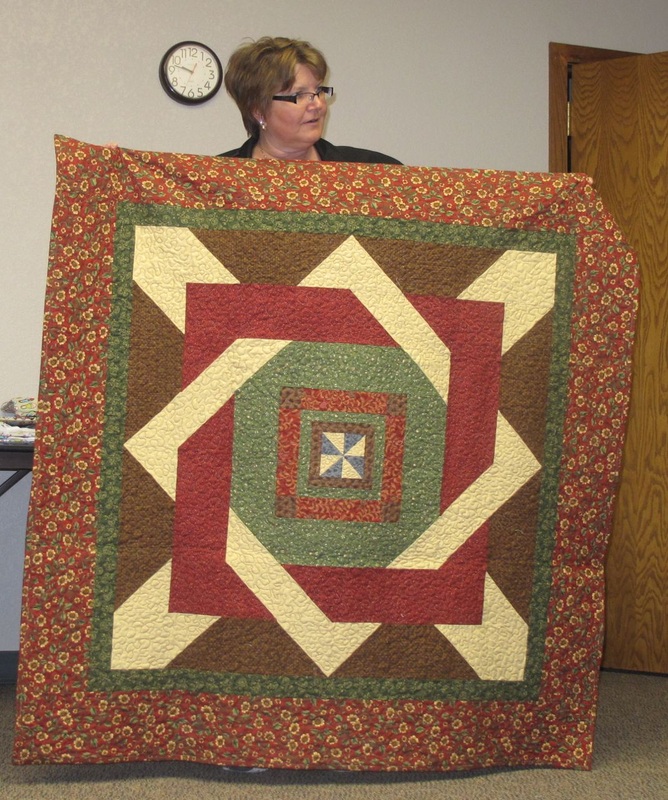 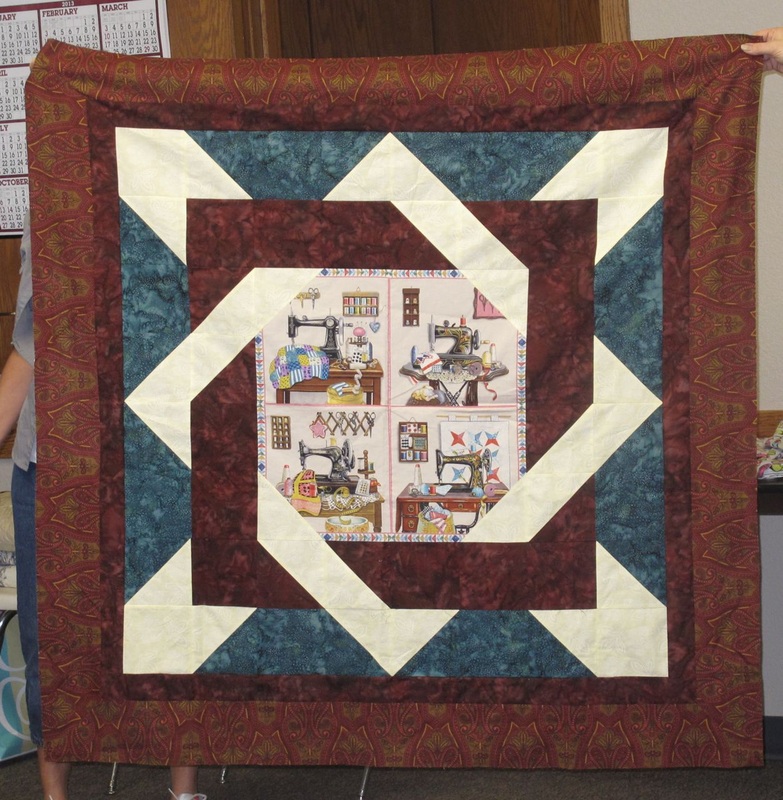 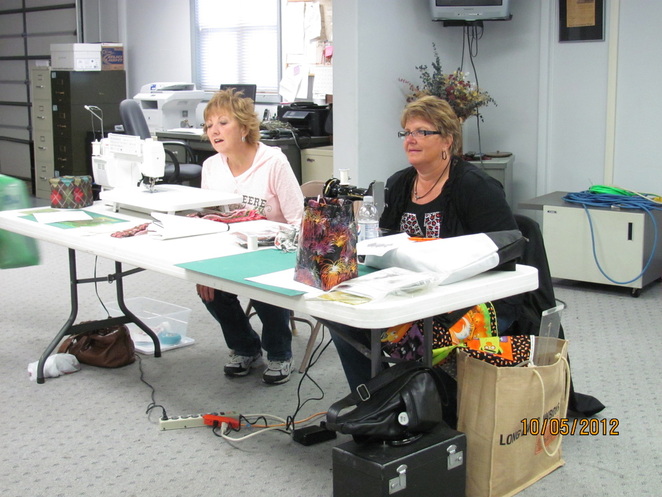 Betty and Mitzi were busy at working on their projects. 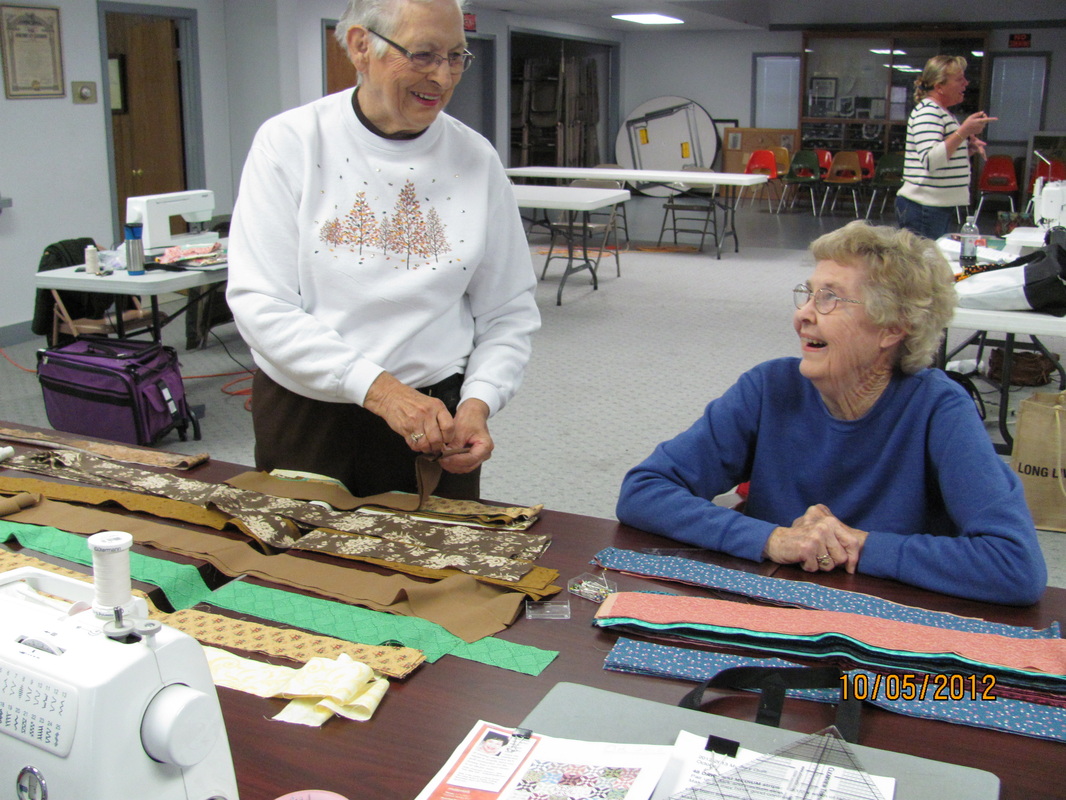 Loretta and Darlene having a great time!! 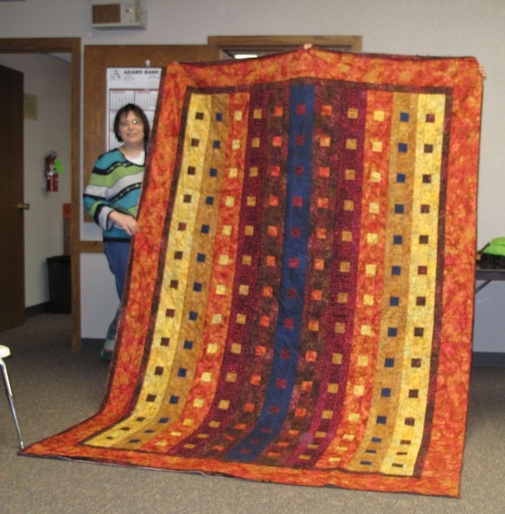 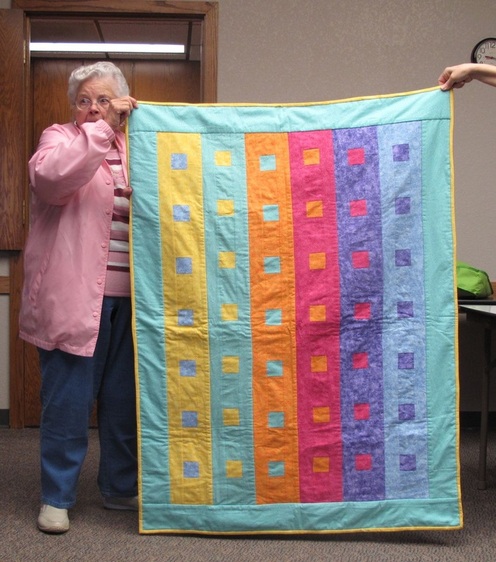 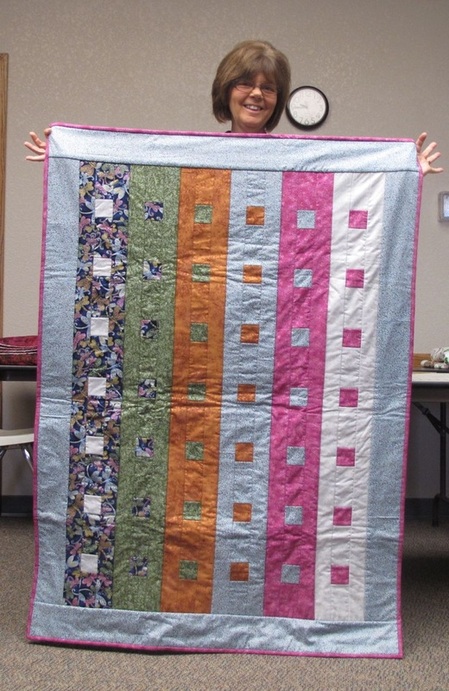 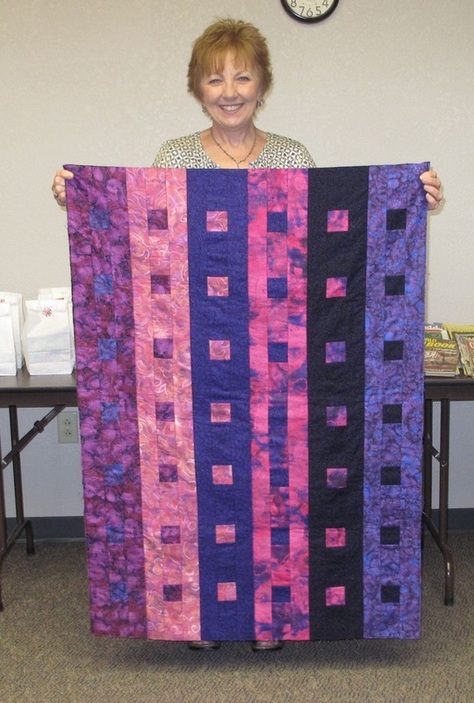 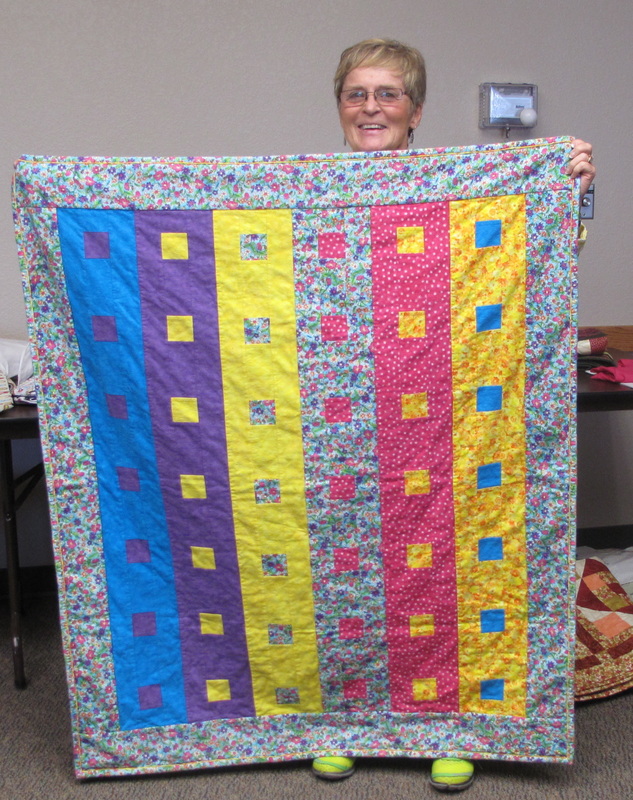 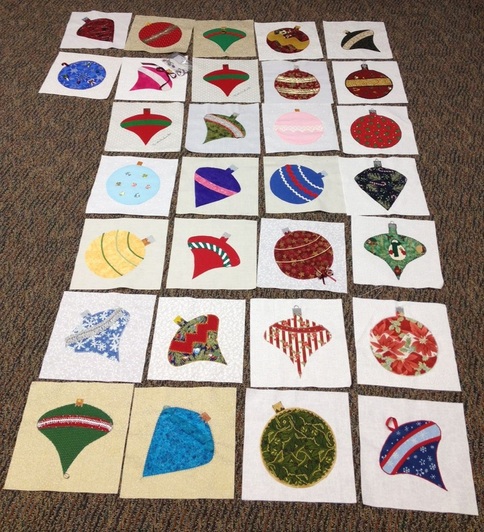 Members wishing to participate in the ornament exchange brought as many "ornaments" as they wished to exchange. It will be exciting to see what projects emerge from these delightful ornaments. 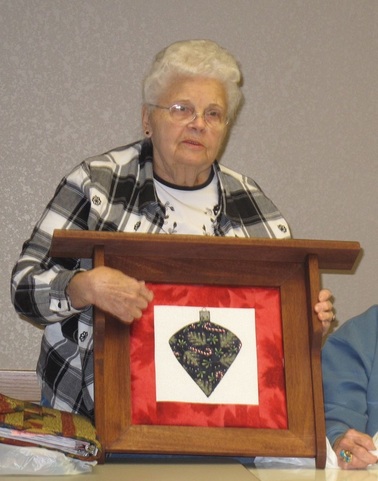 Quilt guild members spent a peaceful day in Madrid, working on a new project, guided by Pennie Reese (in the absence of JoAnn Schultz who was off traveling and having a glorious time seeing fall foliage in the northeast.) 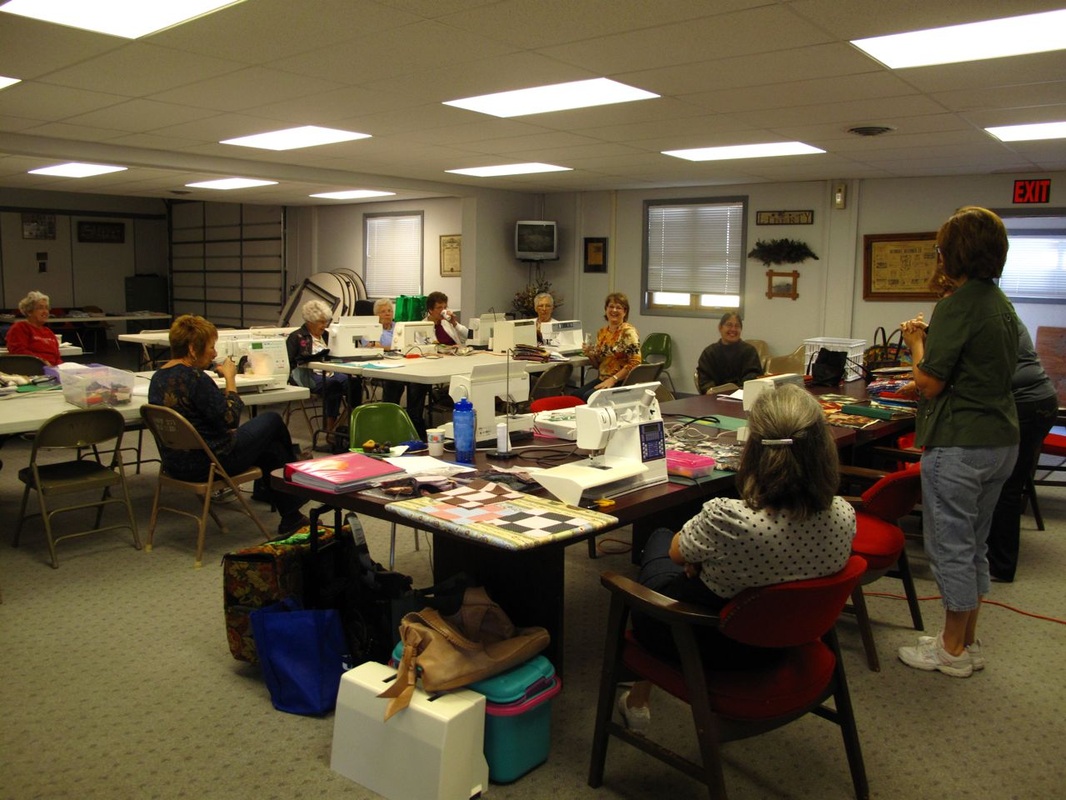 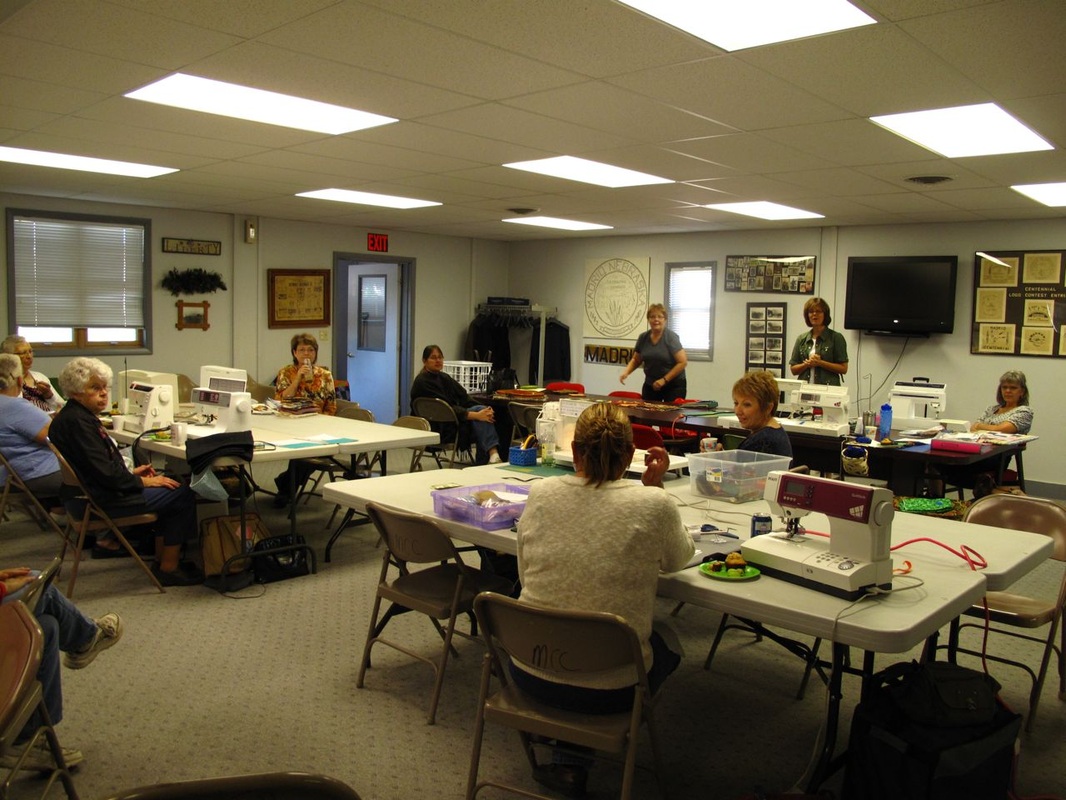 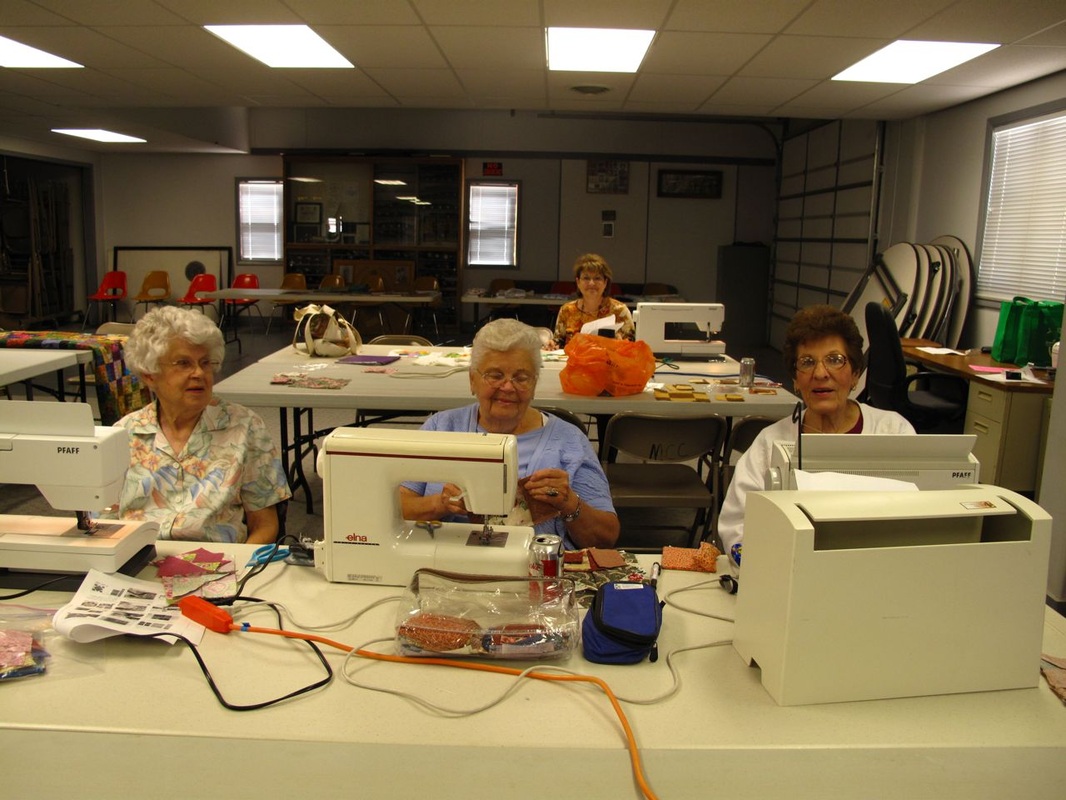 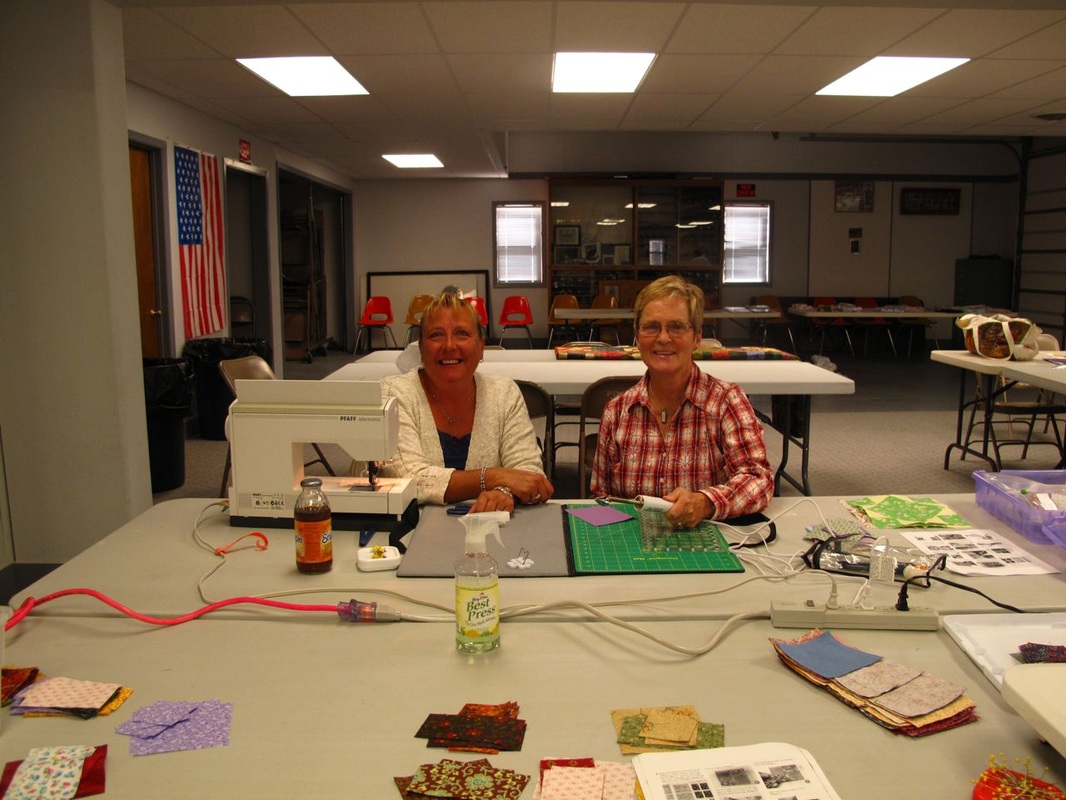 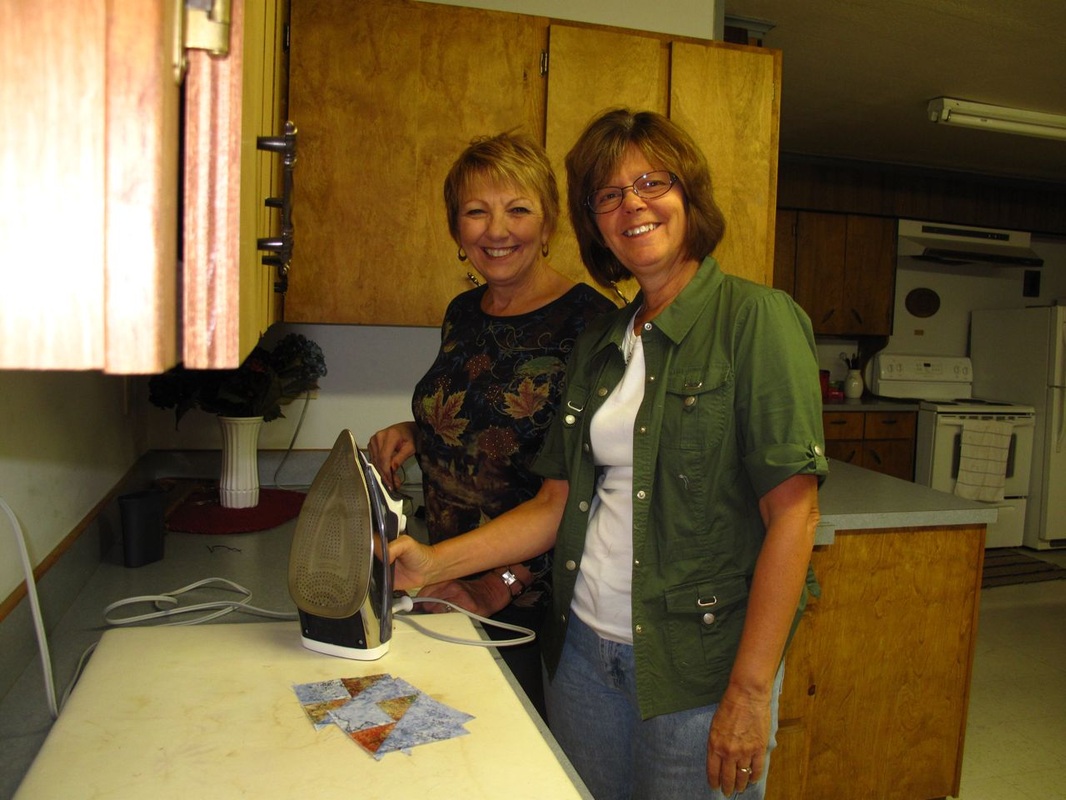 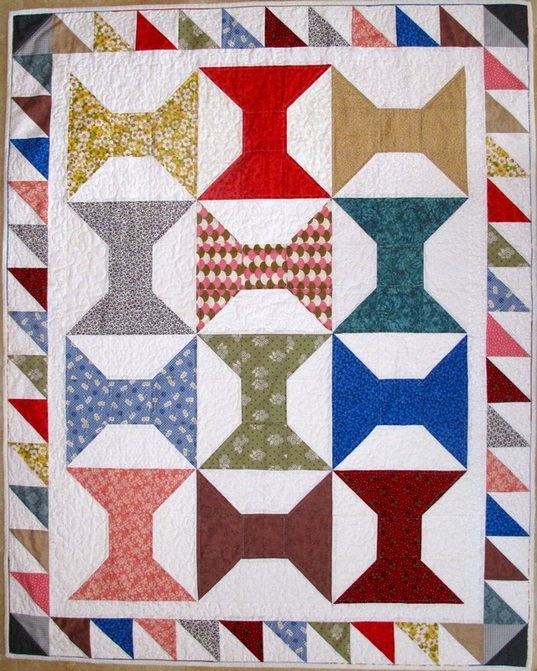 The Quilted Leaf Quilt Guild was asked to make a quilt for a raffle to help defray costs of the 125th anniversary celebration.  The block chosen was the spool pattern. The photo at the left is the completed quilt that will be raffled off. 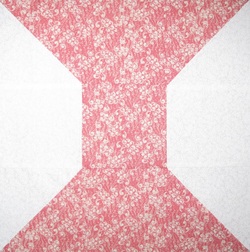 A sample of the spool block for the anniversary quilt. 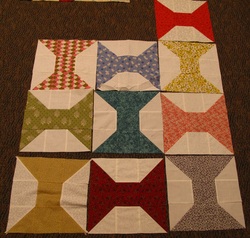 There will be twenty completed blocks for the project. 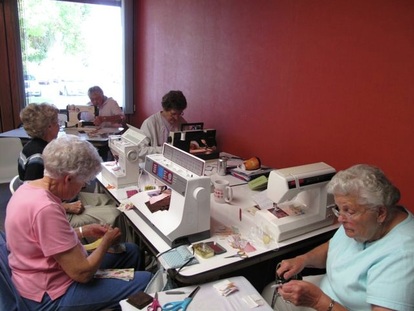 Sixteen ladies quilted on their Floral Bouquet quilts.  What a variety of fabrics were used! 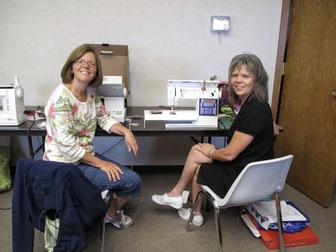 Pennie Reese and Brenda Bloemke share some sister time while quilting together at quilt guild.  Their quilting styles are very different but they both make beautiful quilts. 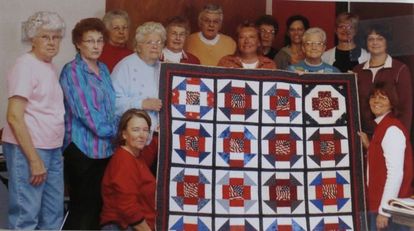 A wounded Nebraska soldier was the recipient of a quilt lovingly crafted by members of our quilt guild.  When a member reported that her son was to be sent to Iraq, and told of the "Quilts of Valor" program that sends handmade quilts to veterans, members eagerly accepted the challenge and got to work on a 20-block, red, white and blue quilt.  Each block was assembled by a different member and assembled last November.  The quilt was sent to the Walter Reed Army Medical Center in Washington D.C. with the specification that it be presented to a Nebraska soldier.  The following poem accompanied it:

The Story About Your Quilt
by Darlene Kuskie
Our Quilt Guild was informed by a member one day
About her son who'd been sent to Iraq far away.
Then she explained about a group that she is a member
Its mission is about people and the service they render.

"Quilts of Valor Foundation" is the name by which they are known,
Making and sending quilts to veterans that they have lovingly sewn.

In July we were asked if we would each make a block
All were excited, glad and anxious to help a lot!
These were done by October without being asked!
Cutting center squares and piecing entire top
In November our QOV members had it quilted and bound, which helped a lot!
One made a pillowcase, another a label for the back
Busy hands and warm hearts, there was nothing to lack!

"Hole in the Barn Door" or sometimes called "Monkey Wrench"
Is the name for the blocks - that's not written French!

Quilting honor and comfort for our wounded has been a pleasure
Our prayers are sent with this gift we hope you will treasure
Accept our gratitude and thankfulness to servicemen and veterans like you
For your bravery and courage to protect our Red, White and Blue.

Twice a year our guild makes a group project.  Participation is optional and each quilter goes home with at least part of a project done.  Our latest project was a one-liner project - making "Tea Time.  The photo below shows the participants.  These quilts are featured at the Meadowlark Gallery during October and in an upcoming feature in "Nebraska Life" magazine. 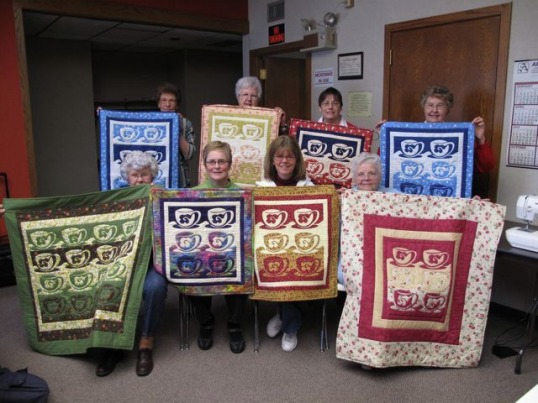